I’ve always been into instant photos. I got my first polaroid camera in 2006, but even before that I was fascinated by my housemate taking and developing proper film. You only have one chance to get it right! Don’t fuck it up! A few weeks ago, I bought another polaroid camera here in Prague from this awesome store called Polagraph.

With smartphones, you get the ability to have an instant photo but without the high stakes that polaroid photography has (– even higher now that the film is discontinued, and Impossible Project film makes each shot cost at least $2). I thought it would be interesting to explore Prague with both cameras, and compare results.

My abilities in photographing polaroids (“scanner” lol) and having comparably sized photos in wordpress are a bit lacking, but this is what I’ve got.

I love the Zizkov TV Tower. I can see it from the window of my temporary apartment, and when I’m walking and slightly lost it helps me orient. For me it crosses the line from ugly to iconic. In these photos, you can ALMOST see the giant terrifying babies crawling up the tower (thanks David Cerny).

There is a vineyard in the middle of Prague. (There actually might be several but this one is a 10 minute walk from my apartment.) It is only open on Friday afternoon/evenings, but sitting on the stairs and drinking wine is the perfect way to end a work week.

Public transit in Prague is comprehensive. If there isn’t a metro, there is a tram. If there isn’t a tram there is a bus. In the U.S. sometimes privileged people like to talk about how only poor people take the bus (bullshit, obviously), and I was interested to hear people in Prague talk about how the trams are for homeless and smelly people. The last time I took the tram I tried not to stare too long at a woman who looked like a model out of Vogue. Her outfit, make-up, and demeanor were so well put together that it seemed unreal. 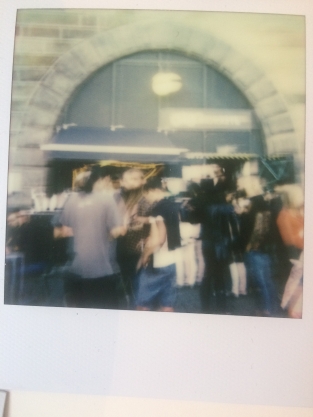 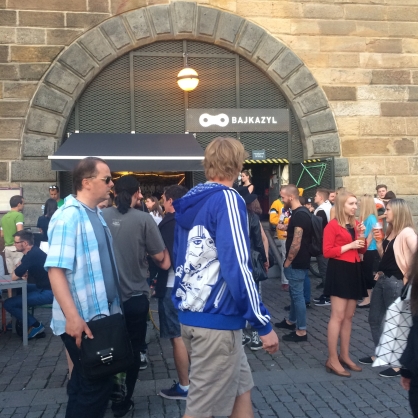 Bajkazyl is a cool community bike space / bar / music venue alongside the river. The second week I was in Prague I bought a bike chain from them at 9pm on a Sunday. Unfortunately for me, despite the great public transit, the biking culture here is less developed (as far as I can perceive right now). This was a case where the polaroid just sucked. I think the light was too low for the photo to develop properly. 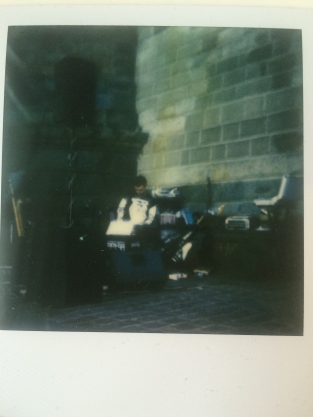 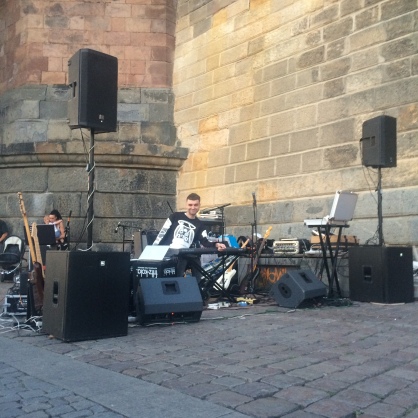 This was the same evening at Bajkazyl. A few bands (not house music! victory!) were playing. One guy told me about how they used polaroids in their music video. I actually like how both of these photos turned out because of the contrast between the two different sections of brick along the wall.

I like street art in new places, and I was feeling the sentiment of this one when I took the photo — I was walking to the farmers’ market on a Saturday morning (ok, fine, afternoon) and wishing that I was with friends rather than alone.

Hey, dog, hey. (A lot of the beer here is about 3% alcohol, so this isn’t as concerning as it may look. The dog’s owner also explicitly told us that the dog doesn’t like wine or hard liquor.) I met some new friends at the market on Saturday, and we ended up walking and day drinking around Prague most of the day Saturday. I enjoyed hanging out with their dog, because although a ton of people here have dogs, they are SUPER WELL BEHAVED and so you can’t just go up to them and pet them (they actively ignore you).

So, I’m definitely still learning how to use Impossible Project film. One challenge is immediately taking it out of the light after it comes out of the camera. Another is configuring the camera settings properly. In real life these photos look a bit less washed out than they might here (you’ll have to visit Prague to see that, though :p) and I feel confident that I can get better at this. That said, hey look — my photos already have instagram filters on them!

One thought on “Instant photos”